Its odd to think of yourself not as a singular thing but as a sort of small scale eco-system home to and reliant upon a wealth of life forms that are not you at all. An odd thought only because it gets forgotten so readily, so frequently and as odd as it is, its equally without relevance to the topic at hand. It is however something that the TV is currently talking to me about.

The second week of this trip was to be spent in Bangkok, sort of vaguely, most vaguely, familiar from half digested, unfulfilling American movie offerings. Bangkok dangerous and I think, though having offered it even less in the way of considered attentions, one of the hangover movies that was not the first one.

We landed in the evening and having endured a long old queue at passport control around a week previous, when first we’d arrived, I had certain expectations of a repeat performance. Question marks certainly existed over reaching our train connection and getting to the hotel. The hotel that was our destination, it had been selected based on three things – first location, it presented little in the way of challenge to locate being very close to the end train station which was the only train line out of the station, second it had reasonable reviews scores and third it was in the accessible price bracket.
The Queue at passport control was there to greet us but did not prevent us from catching one of the later night trains and making our way to down town Bangkok for the first time. Last time we were here it has been a matter of seeking out the lift to our airport district hotel for the one night stop over, this time it was the train and seeing how things went from there.

On maps things have a way of looking simple. In city centres, specifically the foreign and really unfamiliar ones that simplicity has a way of morphing itself, contorting into something else as though looking into one of those old school circus comedy mirrors. The station hung above the roads, with multiple exit stairways to the pavements below. The route from here was less than clear, the obvious barely a small fingers width of wondering was beset by tired eyes wondering which of the now multiple roads and side streets, was the one that was required. Some back and forth with bags followed along with some encountering of dead ends. Bangkok was not so very far north of Cambodia and although it was late it was not cool, it was not cool at all.

The Hotel had one of those trip of your tongue names designed to automatically entice any traveller – a biscuit oasis of a house among the forest of sky scrapper and other, tall enough to obscure neighbouring views, buildings. 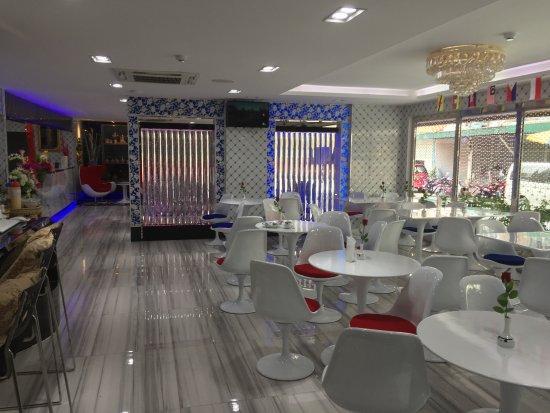 Once discovered pocking out among the building there remained the still the matter of fencing, walls and a route to it.  This though was a significant improvement on the wondering about, pondering on the direction taken and whether this was a direction that ran close to being on track.  It was night and despite a fair bit of human lighting about, things always seem that bit trickier in the partial dark.  Actually locating a route didn’t take so very long from that point with a gap and walk way appearing that worked out rather well.

The reception area was open and it was really notably abundant with air conditioning power, it was a fridge and no meek fridge, this was where dead things went to hang up and be accosted by local boxers given an improbable shot at the world title, just because.

Both of these things were in no small way – most welcome.

The reception area was also glaringly white with a splash of shimmery things and streaks of black and grey – someone had unleashed the 80s and sprinkled it with some early 2000s egg pod chairs – but that was ok, they were open, they had our reservation and it was so refreshingly cool.  No one was insisting that we grow out and forge a mullet with our he or insisting on a shoulder pad infused dress code, feeling like an extra in Beverly Hills Cop was small price to pay for coolness and the promise of a room to enjoy that coolness through the medium of sleep.

Follow Photos and Text – As It Comes on WordPress.com