The day had started with a now potential unhelpful delay, in the making constructive use of it stakes. Even with that backdrop it was hardly a leaping forth out of the blocks effort that followed as contemplation attempted to form into some of a version of a conclusion.

As the title suggests and accurately on this occasion then i did opt for a return visit, cycling around water normally at least means some semblance of direction, an orbiting sort of direction and more flatness than might otherwise be achieved. Exercise has not been much a centre piece to life of late (and not so late) and so things not not going up all too often or too grievously, seems a workable route toward doing something which ought to stand in not too wrenched grasp. 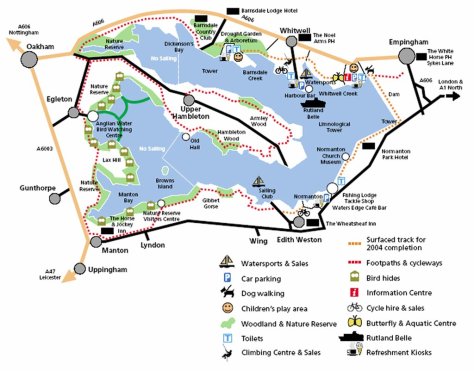 Its not overly well sign posted as a place – and there are multiple little mini centres dotted around, at least there are in the Whitwell bit, one of two places where bikes can be hired for those looking for a sort of pace and progress walking just cant quite provide. There is though bike hire, if you can find it or alternatively set about asking for directional assistance within one of the other ships or centres and then with that successfully triangulate its location &/or stumble upon it though illumination of options.

The pathway, once you get going is decent, a proper pathway with surfaces of deliberate and tarred human endeavour, weaving along and then into the next dollop of car parking and relatively warm (long) weekend human clustering – and to be fair to us all a reasonable place to cluster.

Unlike other European counties but very much like the uk accessing a natural resource and pleasant spot such as this is not free, parking is not quite like a visit to Lutons pickup area but given a fair bit of it is just a field they seem like they might be doing ok out of their investment such as it is.

Its owned by angian water – and once it would have been owned by us – today as anglian it is owned by AWG plc – so its owned by some of us, but even those with shares on the publicly listed AWG will be paying to park upon their water side fields.

An unintentional diversion into the political wrongness of the UKs reasonably recently formed norm.. abort abort not always about that .. back on topic

The water of Rutland is big enough to have a boat with a name that people queue for and it ferries them about.. I’m unclear or rather completely unaware on whether it ferries them to somewhere or if its simply a pleasant distraction for those looking to take in the waters but find themselves handily back exactly there where they’d started and thus in clearly re-traceable steps to their deposited vehicle.

The lateness of the start meant it was now about 15:00/15:15 and the bike was at hand and i was underway. Why dont i own a bike of my own .. well i do but they are neither of them in quite the right way. The main one, which travelled with me around France (Italy & Switzerland – briefly) & Germany, its in need of some significant work, having lived in the garden in states of various coverage for too long. Unfit for outings .. The mountain bike, that ive had much longer and it is a reliable enough old thing except for a dent in its top front gears, which makes its highest gears something of unattainable promise. Thats been true of it for really quite the time, more time than i can quantify, i remember it no other way though i bought it from new and surely encountered by light blue friend in better, more 21 geared times.. Imagine a world of 3 gears or none, those were cyclists of a hardy leg and lungs. Its breaks dont work and i dont have a bike rack on my car and while i can cycle, i can fix stuff and break pads and cycle racks on cars, they are both kind of fixing things in the most minor way possible.

Which reminds me the long life bulb may have gone in the downstairs toilet – it started flickering before opting to do far less.. Post champions league final – not a good night, but a strong argument against 10 man teams playing float goalkeeper in a champions league final or just inviting a random German in a T-shirt to give it a go … Anyway tackled the no longer flickering bulb and inserted a new bulb.. pretty good fixing .. point before disproved – only not .. so either the connecting plastic sockety thing was all hanging down before, hence the flickering and the then not working or the replacing came with unintentional doings. Either way in the day after the fixing (and the bulb did restore light to the downstairs cabin yesterday .. qualifying by some definition as fix) today its hangs beneath the also hanging ceiling unit to which it ought to be fully attached in a none eliminating form.. Leading me to feel maybe i have tested and found my limits and they are altogether in that case, all to accessible. I do however own some short sleeved tops and could also muster the ability to roll the ball to the attacked to kick it in.. or swot a long distance ball into my own net – so perhaps my calling lies elsewhere.

This is not Rutland Water and that is where we were to be .. getting around it and timings – it was a question and i was not entirely sure how far all the way around was.. and if i were, which i certainly wasnt, what sort of velocity a person in my sort of state of fitness, such as it isn’t, would go about it with.
I’d gotten to Normanton, the map seemed to say this was 8 miles and therefore would be 8 miles back.. it also seemed to say the route round was something a little more than 17 miles… suggesting all the way around was little more in the way of distance than going on… the map with its circle around the lake did not appear to back this notion up, nor did any level of looking around provide a strong support for this premise.

It was not 16:00 yet and logic suggested getting around what seemed like, something in the range of being more than 11 miles but probably not more than 16 miles, should not present a problem. The bike needed returning by 17:30 and the place closes at 18:00, so thats a firmer sort of deadline. This was quite a bit of time and a speed in excess of 8mph really seemed like theyought to remain within the bounds of distinct possibility. 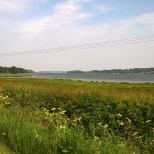 The weather continued to be warmer than it was sunny but beyond this – it was dry. At a couple of points the path moved away from the lakeside and took to out of the no where gradients, it went up the extended hills of its banks and effort was required. The fried egg and cheese, double decker sandwich of lunchen fame seemed to be contributing to a stomach based unease with such efforts. The stomach in these unfit times, it tends to lead the case for the Plaintiff. This passed of well enough for the most part, no misadventures with revisiting came to pass or ever got to threatening to.

Time, as it always seems to, it past unevenly with much of the progress seeming to be made with little of the initial time passing, then not, then time got to passing while the distance travelled seemed pointedly diminished. The track joined road for a bit, but only for a brief bit, then re-found itself with its own track. The signage was there at all junction and points where an option might exist and the route easily stuck too.

Its a pleasant spot, a well made and maintained route and i was back by 17:10, in more than good time for the cycles return without repercussions or issues.

What are you trying to tell us – is it timmy is in the well and needs help?

Oh im sorry – you’re not a goalkeeper and you really want to be free to start those initial modules of that AAC accounting course you’ve been denied since arriving in the UK.. its only fair and right. Sometimes everyone can be a winner.

Summary:
* Rutland Water Has Bikes To Hire and Pathways To Cycle Them On With Little Hinderance
* Getting around takes about 2 hours – better to have longer/awaken earlier, more looking about, appreciation and refreshment break time
* Rutland Water Is Nice Enough As A Place To Visit
* Try To Avoid Playing Confused & Lost Want To Be Accountants In Goal For Relatively Important / Showcase Football Fixtures, Regardless Of Their Nationality &/or Wardrobe

This site uses Akismet to reduce spam. Learn how your comment data is processed.

Follow Photos and Text – As It Comes on WordPress.com